When is it Moral to Break the Law? 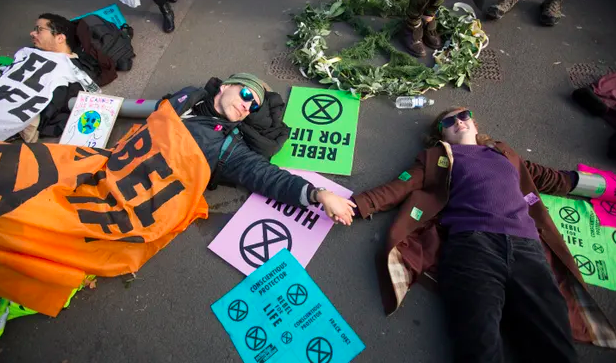 Members of the recently formed Extinction Rebellion group in Westminster. Photo courtesy of The Guardian.

In October 2018, fifteen environmental rights protestors were arrested in London after blocking off roads outside of Parliament. The non-violent group did this as an act of civil disobedience. The term “civil disobedience” seems to have quite a bit of misinformation surrounding it, yet it prevails as a hot-button term with every protest, riot, or politically-motivated act of outrage. The impact surrounds us. We read about civil disobedience as background information when studying Sophocles’ play Antigone, and every year, first-year debate team members in the United States debate its moral justification. Acts of civil disobedience have shaped our society today through events like the Civil Rights Movement. But what is civil disobedience, and why do we need it?

Civil disobedience is typically associated with the author Henry David Thoreau, who paved the way for its spread in Western thought with his writings after being put in jail for protesting slavery and the Mexican-American War. Merriam Webster defines civil disobedience  as “refusal to obey government demands or commands, especially as a nonviolent and usually collective means of forcing concessions from the government.” Names that may come to mind in regard to civil disobedience include Martin Luther King Jr. and Mahatma Gandhi, two figures who used this methodology in their missions for change. However, civil disobedience quickly becomes an object of debate as to whether or not it is morally just.

It was Archbishop Desmond Tutu that famously said, “If you are neutral in situations of injustice, you have chosen the side of the oppressor. If an elephant has its foot on the tail of a mouse and you say that you are neutral, the mouse will not appreciate your neutrality.” This quote has become a rallying cry for resisting oppressive forms of government. It tends to be generally agreed upon that if a population is being oppressed by a regime, disobedience is justified. The issue becomes more complex, however, when we consider a government that is oppressive to some and beneficial to others. Philosopher John Rawls, who is known for his theory of justice as fairness, believed in the importance of civil disobedience, as he thought it was essentially an act of respect for legal authority because legal authority should be challenged if the rights of the individual are not respected.

However, this opens up the ground for the question of how governments should be expected to preserve rights in the first place. As an example, we can think about the trade-off entailed if the government decided to propose an Orwellian bill involving security cameras being placed in citizens’ homes and other private property in order to monitor crime. Your right to security is being bolstered; however, this only happens in exchange for infringement on your right to privacy. From one perspective, the government is improving safety, but from another, the cameras are a harmful and dangerous abuse of state power. If this bill became law, you would have two camps of people: the state cannot be seen as oppressive to everyone because there are people that strongly support its actions.

Let’s say that 51 percent of people support the bill and 49 percent don’t. The supporters have the majority, and using a utilitarian moral calculus, we should respect their ideas. If the 49 percent feel that their basic rights are being squashed by the state, do they have the right to disobey its commands by smashing the security cameras in their homes? This fine line between calling a government oppressive or democratic is where disagreements about protests and other acts of civil disobedience stem from. Critics argue that if we don’t respect the voting system, we will make the state more oppressive and violent than it already may have been, or we may even lose that system altogether. But if we are being ruled by a faulty system, why shouldn’t we try to change it and improve it? And if the damage is beyond change, then why should we have that system in the first place?

At the core of this argument is defining what is morally “correct.” Morality is a tricky thing to measure. Everyone is going to have a slightly different moral compass based on the way they were raised, their religion, their experiences, etc. I’ve found that many people see the laws that we follow as ways to keep the line between good and bad intact. So, when we pose the question of civil obedience, from a legal standpoint, it’s morally repugnant because it challenges what the law sees as good or bad. In a perfect world, the idea of laws always being moral would be true. But we live in an imperfect world where laws can be wrong. The state can do morally repugnant things, and as citizens, we should be confronting it for those actions instead of simply remaining neutral.

The problem lies in the idea of governing laws being moral. How can a governing body appeal to everyone and still make progress as a nation? The idea of making laws that appease everyone’s morals is a fallacy. But states can still make laws that appeal to the morality of most people, as there tend to be pretty widely agreed-upon principles, such as things like taking personal property and murder being morally bad. This could even be an argument for not having a state to begin with, as a state will inherently infringe on the morals of its citizens. But we can also use this statement as an argument for protest and disobedience from citizens as being justified. If the citizens give the state their consent to create legislation, then it is also their right to disobey its commands when they don’t approve. Elected officials are called public servants for a reason: it is the responsibility of the general public to control their nation.