How Girls Are Becoming Feminists Through Playing Sports 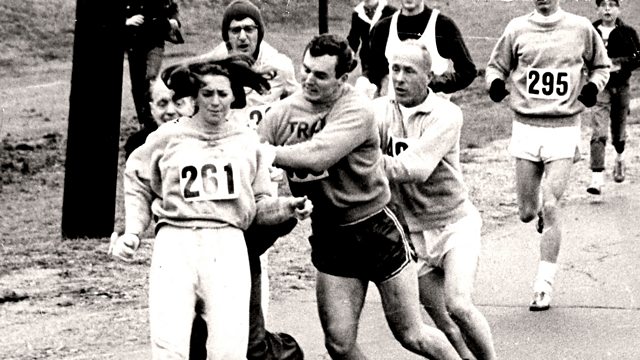 Sports have been dominated by men since the beginning of time; They had sports teams first, their athletes are paid higher, and in general, women have not been given as many opportunities in sports compared to men. Girls are becoming feminists through participating in sports because they are defying society’s stereotypes of a heavily male-dominated area. A feminist is someone who follows feminism and its beliefs about the equality of the two sexes. It’s through women like Kathrine Switzer, Venus Williams, and Billie Jean King that girls are able to play sports.
It was the Boston Marathon, the year 1967. A woman named Kathrine Switzer emerges wearing the number 261, waiting anxiously for the gunshot to be fired, signaling the start of the race. Kathrine Switzer was the first woman to enter the Boston Marathon, and recently, she ran it a second time at the age of 70. She entered the race using her initials, K.V. Switzer for the registration form, and she was only stopped after she had started running. A man started chasing after her and told her to get out of his race. Kathrine was running with her boyfriend and cross country coach who shoved the man aside and yelled for her to keep running. Kathrine finished the race, and she knew that it was up to her to show women all around the world that they too can run, they too can do things just as well as men can, and that they too can believe in themselves. Thanks to Kathrine, women were officially able to run the Boston Marathon in 1972.

Billie Jean King, a famous tennis player, is another influential woman who helped pave the way for young girls. In 1973, King beat Bobby Riggs, another accomplished tennis player in a match titled the Battle of the Sexes. Billie Jean King said, “Everyone thinks women should be thrilled when we get crumbs. I want women to have the cake, the icing, and the cherry on top.” Billie Jean King received the Presidential Medal of Freedom in 2009, founded the Women’s Tennis Association, and led a movement demanding that women receive equal prize money in co-ed tournaments. She is one of the most well-known feminists in the world, and she inspires girls to accomplish their dreams.

Venus Williams is the third of many female activists and athletes that inspire generations of girls. She’s an accomplished tennis player and activist. In 2007, she was awarded $1.7 million at Wimbledon, which was the same amount that Roger Federer received when he won first place the same year. Venus advocated for women’s’ rights and equal pay, and she helped push for the policy that occurred in 2007, ensuring equal pay for both men and women athletes in tennis. Women have long been paid less than men, whether it be off or on the field.

It is through people who advocate for equal rights and a just society that women become closer to being treated equally to men. However, these women mentioned above, are not the only women who are working towards an equal world and empowering girls. You too can be a part of that change, and many of you already are. You are contributing to the cause by participating in sports! Sports have long been dominated by men, and in many instances, they still are, but even by simply playing a sport, you are representing women in sports and working towards equality. You are becoming a feminist by playing a sport, or even many sports. It doesn’t have to be some obvious event like Kathrine Switzer’s, but by playing a sport you are standing up to an unjust world. By participating in a sport, you are a feminist, and you are making the world a better and more equal place. In the wise words of Kathrine Switzer, “All you need is the courage to believe in yourself, and put one foot in front of the other.”