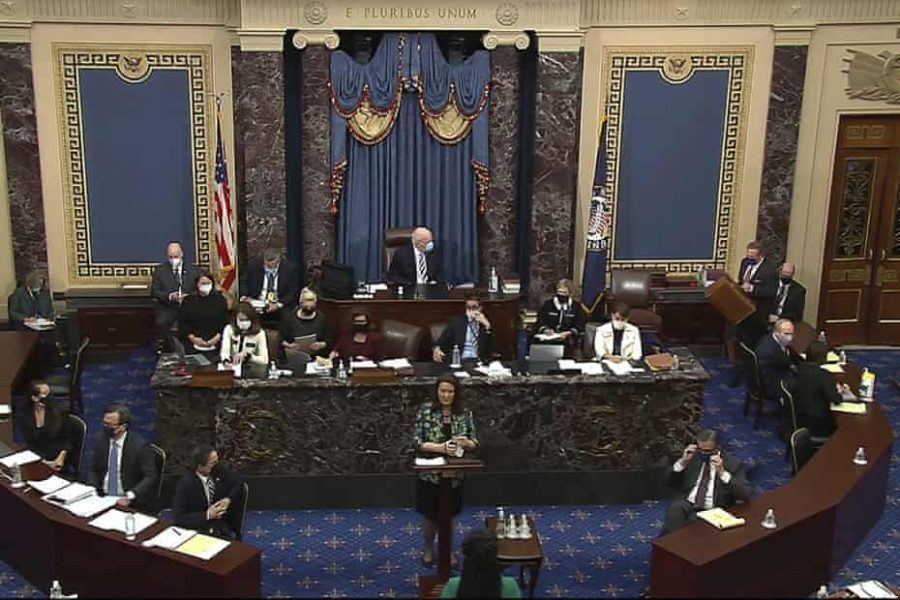 A congressional aid addresses the U.S. Senate. Photo courtesy of The Guardian.

On January 6, 2021, Americans watched as right-wing Trump supporters invaded the nation’s Capitol, leaving destruction in their path. Both lawmakers and everyday Americans were outraged and called for accountability. This insurrection was unprecedented, and although President Trump himself was not present in the violent crowds, many view his rhetoric as the basis of the uprising.

As the mobs broke out, Congresswoman Ilhan Omar of Minnesota announced she was drawing up articles of impeachment against Mr. Trump. Omar’s cries for impeachment were echoed by many fellow democrats and some republicans, all of whom were shaken by the recent attack on the Capitol building, public servants, and the democratic election process.

The impeachment trial began in Congress where House managers made their case against Mr. Trump. The case itself was divided into three separate sections, sometimes referred to as “chapters.” The first section outlined how Mr. Trump led his followers to believe that the election had been stolen and fraudulent. Chapter one highlighted how Mr. Trump summoned supporters to Washington D.C. the day when Congress was certifying the Electoral College results.

The second section recalled the actual events at the Capitol. During the trial, House managers showcased unseen footage of the riots including a clip of a crowd chanting for former Vice President Mike Pence’s death. Another clip showed Capitol Police Officer Eugene Goodman’s efforts to protect Senator Mitt Romney of Utah from the approaching mob, which was dangerously close to the Senate Chambers. This unseen footage revealed that these rioters were even closer to government officials than previously acknowledged.

The last section of the trial focused on Mr. Trump’s lack of action to stop the riots from the White House. Mr. Trump did not condemn the riots and refused to take action when those around him urged him to do so during the initial hours of the riots. The riots waged on for hours during which time the former president was silent. This incitement and lack of prevention led many large media companies including Facebook and Twitter to permanently or indefinitely suspend Mr. Trump’s accounts.

After hearing the case, the House voted 232 to 197 to approve the single article of impeachment, which accused Mr. Trump of “inciting violence against the government of the United States.”  In late January, the House of Representatives sent the articles of impeachment to the U.S. Senate, who would vote to acquit or convict Mr. Trump. If convicted, Trump would be barred from running for public office again.

On February 13, the Senate voted to acquit Mr. Trump, but seven republican senators voted to convict, making it the most bipartisan support for conviction in the history of presidential impeachments. Senate Minority Leader Mitch McConnel voted to acquit Mr. Trump, yet agreed Mr. Trump incited the violence and was “practically and morally responsible.” “These criminals were carrying his banners,” McConnel stated as he addressed the Senate. Many colleagues were outraged at Senator McConnel’s decision to vote to acquit Mr. Trump. McConnel believed Mr. Trump should not be impeached because he is no longer the acting president of the United States, although it is worth noting that McConnel delayed the impeachment trial for many weeks, which did not allow for a trial during the final days of Trump’s presidency.

Although Mr. Trump was aquitted, the former president’s reputation is hardly intact. Former supporters around the nation have turned their back on his rhetoric after the events on January 6, 2021, a day which will undoubtedly be remembered in history books in the near future.