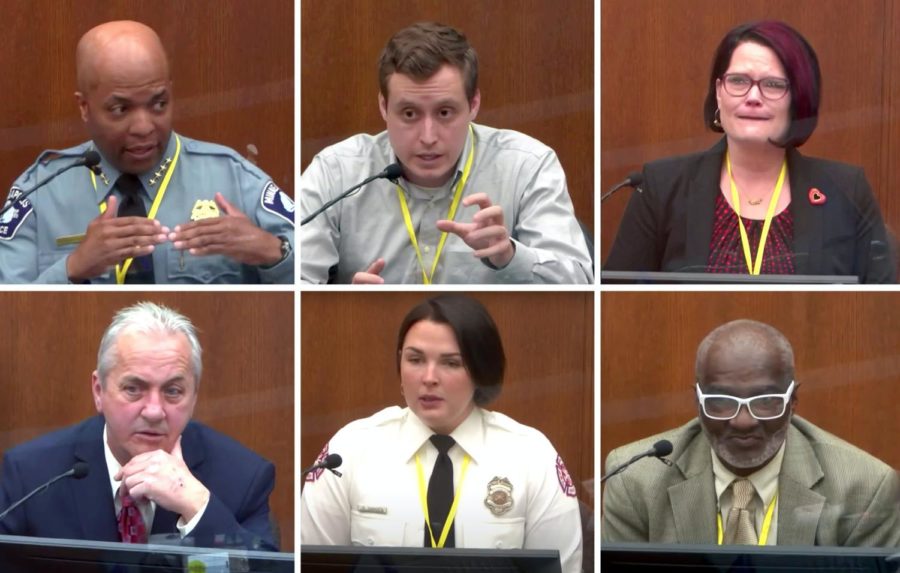 The witnesses at Derek Chauvin's trial. Photo courtesy of the Star Tribune.

“Believe your eyes,” said prosecutor Jerry Blackwell as he delivered the opening arguments at the Derek Chauvin trial. Within the first week alone, many witnesses took the stand to deliver their testimonies of what they witnessed at the murder scene on May 5, 2020. Courteney Ross, Floyd’s girlfriend, and medics who arrived on the scene minutes after Floyd lay lifeless under the knee of Derick Chauvin, all made an appearance. The world had its eyes locked on Minneapolis, Minnesota, and many waited in anticipation.

Chauvin’s lawyer, Erik Nelson, stated that there was more to Floyd’s death than the 9 minutes and 29 seconds of video that captured Floyd’s tragic death. Two key factors played a role in Chauvin’s defense at this trial. The first element was Floyd’s drug use, and the second was whether the stress and environment that Chauvin experienced played a role in the decisions that led to what happened. Both factors of this argument are heavily debated, but they are important to consider.

Courteney Ross’s testimony on the fourth day of the trial revealed the goodness Floyd brought into her life and other people’s lives. She shared the story of how they met and how genuine he was. Ross also shared Mr. Floyd’s history of drug use, which was one of the central points of this case. Toxicology reports prove that there was methamphetamine and fentanyl in Floyd’s system, and Eric Nelson focused on this evidence in the defense arguments. The reports show that the amount of fentanyl in Floyd’s system was a high enough dose to have fatal effects, but due to surveillance footage, it is relatively easy to rule out drugs as the cause of Floyd’s death. Even though Floyd was responsive when police encountered him, Mr. Nelson used his history of drug usage to form the majority of his argument.

The second argument, as aforementioned, is whether the environment at the scene impacted Chauvin’s actions. Stress from so many people surrounding the officers involved is said to have played a role in Chauvin’s decision-making, which Mr. Nelson said was a cause of Chauvin’s actions and Floyd’s death. Undeniably, Chauvin violated police policies regarding the use of excessive force. Medical witnesses and police chiefs gave their testimonies and professional opinions on whether Chauvin’s use of force was excessive, and the majority stated that Floyd’s cause of death was a deprivation of oxygen, which contradicts the defense’s key argument.

According to a comprehensive analysis of Chauvin’s position on Floyd, at least half of Chauvin’s entire body weight was on Floyd’s neck. According to retired pulmonologist Dr. Martin J. Tobin, all of Chauvin’s weight was distributed on Floyd’s neck and back. The footage shows that Chauvin’s toes were off of the asphalt, which clearly shows Chauvin’s use of excessive and unnecessary force. Many medical workers who gave testimonies during the second week of the trial stated that drug use was not the cause of Floyd’s death, and autopsy reports confirm that. Experts say that Chauvin’s use of excessive force could have killed anyone, and this crucial fact was challenged by Mr. Nelson and Chauvin.

After weeks of testimony, both sides rested, and the jury gathered to deliberate. On April 20th, the world tuned in to hear the final verdict of the Chauvin trial. The jury made a quick decision, and Judge Cahill announced that Derek Chauvin was found guilty of all three charges: second-degree unintentional murder, third-degree murder, and second-degree manslaughter. Many relatives and leaders across the United States have commented on the final verdict. President Biden spoke to George Floyd’s daughter, Gianna, after the verdict was announced. “Daddy did change the world. Let that be his legacy: a legacy of peace, not violence— of justice,” he said. This verdict undoubtedly teaches the importance of accountability, but this is only the first step towards justice. Many people have kept a close eye on this murder trial, and now it is just a matter of what the world learns from it.