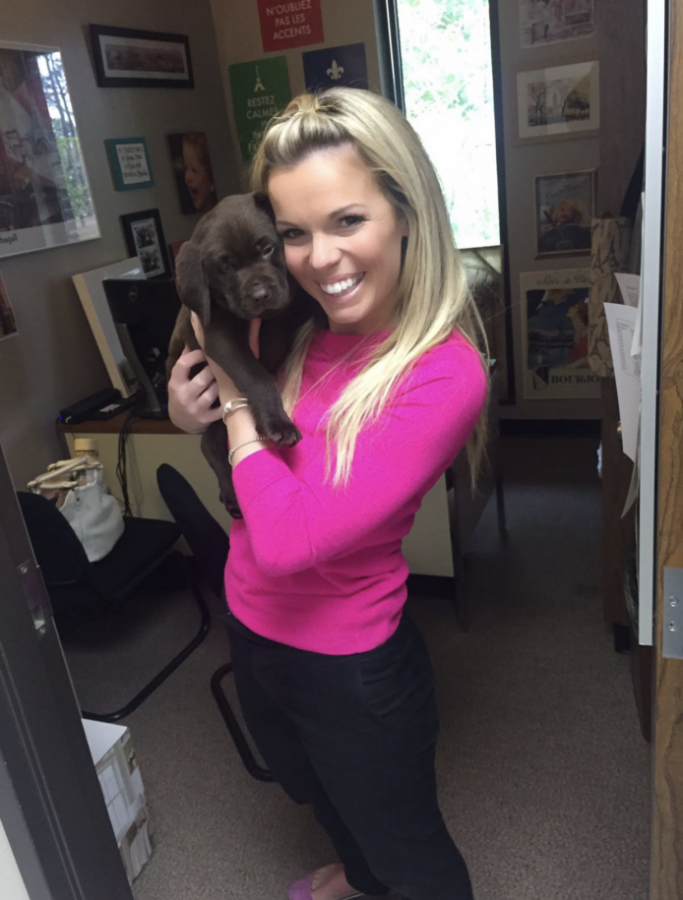 This year, the Visitation Upper School welcomed a new teacher into our community! Niki Stevenson has taken on the position of Upper School French teacher, and we could not be more excited to have her. Editors Grace Loonan and Lucy O’Brien have asked Mrs. Stevenson some questions to get to know her better as a person and introduce her to the school:

Many people have noticed your accent, can you tell us a little bit about where you grew up?

Mrs. Stevenson is a proud Scott, having grown up in Glasgow, a city in central Scotland. She moved to the United States fifteen years ago, and she’s heard from other people living here that her Scottish accent is strong. However, when Mrs. Stevenson is back in Scotland visiting family, her accent is very weak compared with the rest of the people living there.

How did you get into teaching?

Mrs. Stevenson completed her university studies in Paris, graduating with a Master’s Degree in language and literature. She says that graduating with an Art degree is hard, since it doesn’t point you to a direct career path, and in fact, she didn’t begin teaching after she graduated. Instead, Mrs. Stevenson worked as an interpreter for a year and absolutely loved it! She worked with asylum seekers and people affected by war who were looking for a better life in the United States. She found this job very rewarding, and she enjoyed using language to make a difference in people’s lives. In fact, Mrs. Stevenson was very interested in the idea of using language to help and inspire people to make a difference. Interpreting was a freelance job though, and it didn’t provide stable hours or pay, so Mrs. Stevenson went back to school to get her teaching license. She started her teaching career working at a difficult school in Scotland, and a year later, she got a job in Chicago, Illinois. Mrs. Stevenson loves helping kids to see the relevance of language. In Europe, it is very easy to travel to different countries and experience many different languages. In the United States, on the other hand, other languages don’t seem as relevant or necessary to learn, since people don’t travel outside of the country as much. Mrs. Stevenson says that more people in the U.S. are recognizing the importance of learning to speak Spanish, but it’s challenging to convince Americans of the importance of learning French as well. She loves bringing the language alive as she teaches it, and she really enjoys seeing kids who weren’t interested in French at first become super interested and start to love it!

How long have you been living in the US?

Mrs. Stevenson moved to the United States in 2006, and she has been living here for fifteen years now.

What made you decide to come to Visitation?

Last summer, Mrs. Stevenson was offered another position, but she decided not to accept it because it involved teaching younger kids, and she prefers working with older students. She had been in contact with Dr. Barter earlier in the year, and when a position as French teacher opened up, Dr. Barter got back in touch with Mrs. Stevenson. She received this call from Dr. Barter in August, and soon afterward, she got the job!!

What is your favorite thing about Vis so far?

Mrs. Stevenson says that she really likes how everybody is so keen and willing to help out. She’s noticed that people are very generous with their time, taking moments to check in and see if she needs any help with anything. Mrs. Stevenson also talked about the nice feeling of camaraderie amongst the staff. She loves the all-girls school environment, especially since, from age 5-16, she too went to a small, all-girls private school! She sees her school experience reflected in Vis and enjoys seeing the bonds between students, the excitement to learn, and the general kindness of everyone. Teachers and students all share the same goals and are on the same page. She feels lucky to be at a school where everyone, staff and students alike, supports one another.

Where have you worked prior to teaching at Vis?

After arriving in the United States, Mrs. Stevenson taught at St. Rita of Cascia High School, an all-boys Catholic school in Chicago. She said that she prefers the all-girls school atmosphere at Vis since the boys at St. Rita could be very rowdy, and discipline issues and pranks were more commonplace. Mrs. Stevenson says that she appreciates how everyone is so pleasant and motivated here. She thinks it’s a good thing for boys and girls to be separated in the classroom, since it limits distractions, causing students to be more focused, motivated, and driven. However, she does agree that it’s nice to have links with Saint Thomas Academy. After teaching in Chicago, Mrs. Stevenson and her husband left their jobs and went backpacking in different places across the world for an entire year. This adventure may seem strange to Americans, but in the United Kingdom, it’s very normal for people to devote a period of time to travel before they settle down. According to Mrs. Stevenson, the trip was amazing! After her travels, Mrs. Stevenson moved back to the U.S., where she worked at the University of Madison, Wisconsin. She then accepted a full-time job as a French professor at the University of South Carolina, and five years later, she moved to Minnesota to teach.

What is your favorite thing about Minnesota?

What is your favorite thing about teaching French?

Mrs. Stevenson has always loved French, perhaps because it was the language her mother spoke to her as a child. She loves language in general, but French has a special place in her heart, and living in France strengthened her affinity for the French language and culture. “French is a part of me.” She has a stronger bond with French than with any other language and has always adored it.

Do you speak any other languages besides French and English?

What is the difference between a Scottish and an Irish accent?

Mrs. Stevenson is actually half-Irish and has a lot of family in Ireland, so to her, the accents sound very different from each other. Americans have a harder time distinguishing them though since they don’t live in either of the places and aren’t as familiar with the accents.

Do you have any children?

Mrs. Stevenson has a ten-year-old daughter, as well as three-year-old twins who were born in 2018. She is raising them to be bilingual (fluent in both English and French). Mrs. Stevenson sees the value in teaching languages to children when they are younger, since it’s harder for teenagers and adults to become fluent in a language. Mrs. Stevenson has noticed that in the United States, introducing other languages to children sooner is becoming more of a priority. Languages are starting to be taught at elementary schools, and kids are learning languages early!

Is there anything else you would like to say?

Mrs. Stevenson feels extremely honored to be teaching French at Vis, and she is grateful to have the opportunity to work in such a nice, supportive environment. She calls this the “dream job” for a teacher and says that she feels so at home here. Finally, she said that Homecoming Week was incredible!