Beyond the Brand Name: The Obsession with Elite Colleges 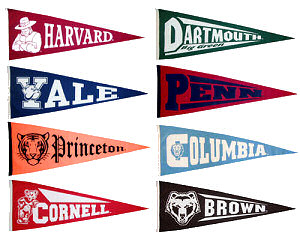 As application season rolls around, high school seniors have been haunted by the question: where are you going for college? Everyone, whether it be teachers, parents, or peers are asking this question, and everyone is ready to offer their opinion about the answer- whether you want it or not. Many students, especially at a college preparatory school like Visitation, have been feeling the pressure to pick the most elite, selective colleges out there to attend. Well-known schools with brand name recognition, such as those in the Ivy League, are viewed as the best option and the ultimate goal for any student. Going to one of these colleges is often conflated with success, but this notion is completely untrue.

Though many amateurs would prefer a school with a recognizable name, anyone who knows anything about the college search will say that this is practically irrelevant. Experts have shown time and time again that the benefits of going to an Ivy League or similar college are wildly overblown. In terms of salaries, it is true that graduates from elite schools tend to make more than their peers. However, in this case, correlation cannot prove causation. In the first place, those who are admitted to these more selective colleges are often already outperforming their peers. When comparing students with similar credentials, researchers were unable to find evidence that supports the idea that the college someone attends substantially affects their success later in life.

So then, what is the benefit of attending Ivy League schools? Aside from pride and prestige, attending an elite university provides students with connections, especially among the rich and powerful. Notable exceptions to the trend between connections and earnings are students from low-income backgrounds, along with students of color. Students from these communities would have previously lacked connections, and attending a prestigious college allows them to access important networking opportunities. For example, going to school with the child of a Wall Street executive would make one more likely to land a job at the parent’s company. The wealthy often already have access to these job markets, but others lack the same opportunity. Attending a school such as an Ivy League college can make up the difference. However, these benefits don’t mean that the actual education provided at elite schools is superior.

There are several key aspects to consider when looking at a college, many of which can have an impact on students’ future success. Things such as amenities, research opportunities, or majors offered can all have an impact on what someone chooses to study and how well they do. Additionally, while prestigious academics may serve as a motivation for some, others find it to be stressful and draining. Ultimately, it is best for a student to succeed at whatever school they choose, regardless of difficulty or prestige. Simply graduating college can boost earnings by as much as 50%, and post-secondary schools tend to look for applicants that succeed in their undergraduate years, regardless of where they attended previously. Going to an elite college, only to struggle and burn out, will only harm a student in the long run.

Besides academics, colleges boast numerous other factors which can make an impact on success and quality of life over the years a student spends there. College choices can be made for almost any reason, including location, sports, or food and dorm quality. Most students will also consider a school’s cost and available scholarships, in order to have a college experience that won’t result in crippling debt. No matter what a student’s priorities are, they should choose a school well-suited to their goals, wants, and needs, even if it isn’t well-known or prestigious.

At a school such as Visitation, students can often feel pressured to choose the most elite school on their list, regardless of whether it is actually the best option. However, the obsession with elite colleges is little more than an unfounded fervor, and success is possible at any school. Seniors should keep this idea in mind when making their college selections, and for younger students, it should be considered during their search. Though prestige can seem attractive, it isn’t worth sacrificing happiness or success.