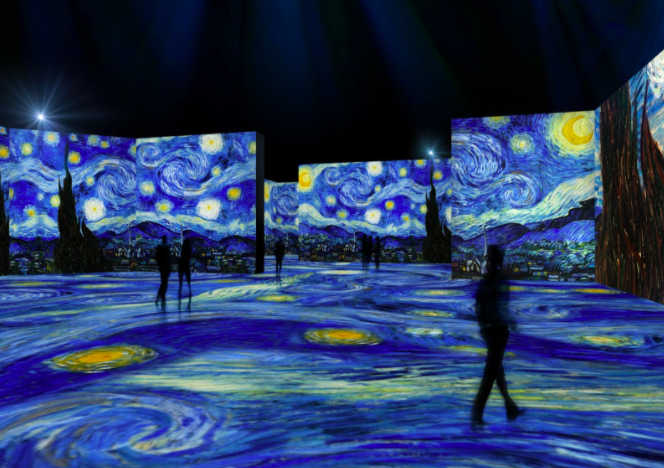 Dutch painter Vincent van Gogh is among the most influential artists in history. Immersive experiences of his work have been popping up since the early 2000s, and the most recent showcase has caught a lot of attention. This new series of exhibitions was created by Massimiliano Siccardi and its soundtrack produced by Luca Longobardi. The music includes instrumental pieces along with classics like “Non, je ne regrette rien” by Édith Piaf. The Minneapolis location is at Lighthouse Minneapolis, and it will be open until February 27, 2022.

As you walk through a hallway into the large space, you can already hear the mysterious music playing. There are two rooms in the exhibit, but both play the same immersive experience on the screens. The exposition has a quasi-storyline to it and is truly moving. Immersive really is the best word to describe the exhibition. Every wall is a screen that displays beautiful images in creative ways. The exposition adds movement and life to the artwork, displaying the scene Van Gogh painted as if it were really happening: grass sways, candles go out, flowers grow, etc. In addition, the music tells the visitor what emotion to feel with each new song, and scenes flow seamlessly one after the other.

Another benefit is that it does not matter when you walk into the exhibition. It may be in the middle of the showcase, but the exhibit continues to repeat as visitors circulate in and out. You will be able to see the part you missed, and you can also stay for several showings. Perhaps the only downside was the limited seating, but it was possible to rent portable chairs or bring your own. If sitting on the ground does not bother you, I think it adds to the experience. All in all, the exhibit was a wonderful tribute to Van Gogh’s work, and I highly recommend it to art enthusiasts and laypeople alike.