The Newest Epidemic at Visitation 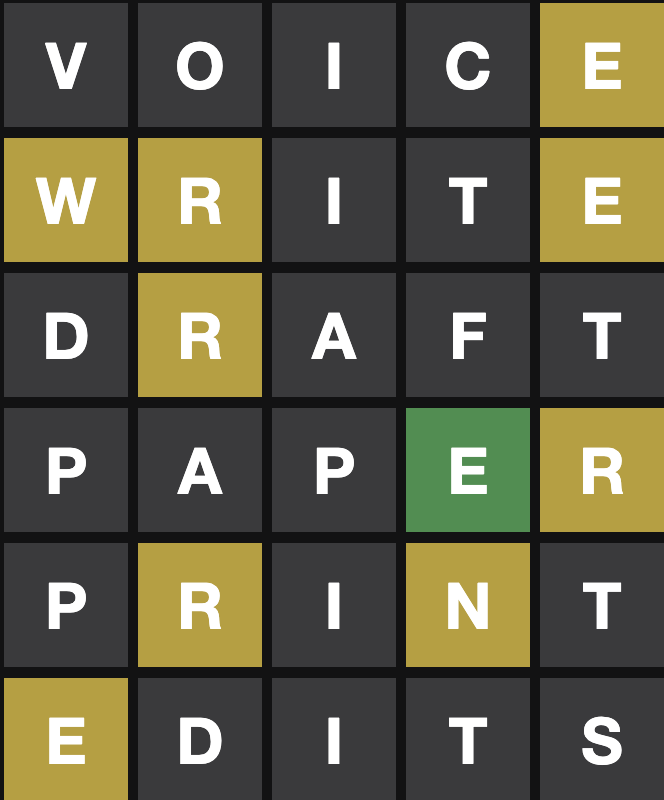 As a student of Visitation, I feel obligated to bring this news to the attention of my fellow peers and faculty. After a number of weeks of acute observation of the members of the Visitation community, I have noticed yet another epidemic racing through the halls of Vis. Everywhere you look Vis girls and teachers alike have been addicted, overtaken even, by this contagion. Whether it be during break, homeroom, or a teacher’s lesson, there are whispers and inklings of this common obsession between girls. It is both addicting and contagious, yet a very simple concept. This new entity roams the school and takes up real estate in everyone’s browsers and has a chokehold on almost every girl’s computer as they have a tab or browser window devoted solely to this practice. I would never in my wildest dreams think that something as simple as a daily five-letter word could become such an outbreak within the Vis community. At this point I am sure you know what I am speaking about, the epidemic that permeates the classrooms of Visitation is indeed Wordle.

For the few that have not heard of this “Wordle game,” as one could assume from the name, it is a word game, similar to a crossword, Boggle or Scrabble. Yet the goal is for users to guess a daily,  hidden word in the least amount of tries possible. With one hidden five-letter word every day, users are given six tries to uncover and solve the word puzzle. As players guess different words, letters are denoted in either a gray color if it does not appear in the hidden word, a yellow color if it is contained in the hidden word, yet not placed in the correct location, or green if the letter is both in the hidden word and in the correct location. If users input a word with 6 green letters, they have correctly uncovered the daily Wordle and must wait for the next day to be challenged again.

It is evident that Wordle is not just an addiction of Vis girls, but rather a viral trend. As of February of this year, Wordle has captured the attention of many people across the globe, as it has become a part of millions of people’s daily routines. Yet Wordle itself had very humble beginnings. Created by software engineer Josh Wardle in Brooklyn, New York in 2013 for his business partner, it started as a fun game between the two of them. From then on the game became a rapid internet success, exponentially growing in players. Wordle was eventually sold to the New York Times on February 10, 2022, for an undisclosed amount of money but to quote the New York Times “the deal was in the low seven figures.” The game holds a growing, epidemic-like following.

Like everything viral, Wordle has evolved over time. Although they are not directly associated with Wordle, many similar games have resulted from the simplistic, yet addictive format of Wordle, spanning many different interests and topics. To name a few, Heardle where users must guess the song from audio cues, Wordle where players must guess the daily country, Nerdle where players must guess the correct daily math sequence, or Taylordle, a Taylor Swift themed wordle for all the Swifties out there, as well as many, many more. Needless to say, Wordle has evolved from its initial two-man competition and become an influence for daily competition games of any subject. Even if you don’t see the hype in the original Wordle, there is most definitely an interpretation out there for you.

If you are anything like me and are playing the original Wordle or some other rendition it has most likely become part of your daily routine, just as much as brushing your teeth or making your bed.  Wordle is a way to wake up your brain each day.  Which raises the question, what makes Wordle so addicting and gives it such a large following? There are many different theories or answers to this question. It could possibly be the low-stakes simplicity of the game. Players who do not want to spend money or time on online games find Wordle to be a simple and fun activity. Or perhaps  Wordle may be so addicting to its players due to the dopamine rush and feeling of accomplishment one receives when all five tiles flip to green. As said before, Wordle is a free, low-stakes, quick serotonin boost that, in my opinion, many people could use in our modern world. Worldle’s addictive nature may also be attributed to the challenge it presents. Those people desiring a personal challenge use Wordle as a way to have a competition with themselves, by keeping a streak and always trying to “get the green ” in fewer tries than the day before. Others use Wordle to compete against others. Many text their results in family or friend group chats, always trying to one-up their opponents, keeping them coming back for more as soon as a new word drops. While these reasons all play a part in Wordle’s popularity, I believe that at the forefront of all this is that Wordle creates a sense of community. Contradicting the usual nature of an epidemic, Wordle brings people together. Playing Wordle is something families and friends can do together, even at a distance, and what starts as a daily competition develops into daily conversations and connections that unite us.