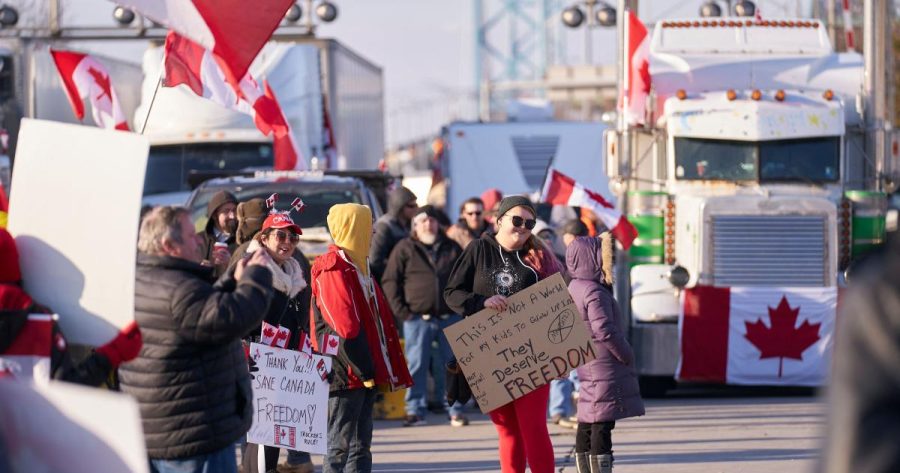 On January 15, the Canadian government imposed a vaccine mandate that applied to any truck drivers who crossed the border. There are a great number of such truckers, and it did not take long for them to protest this mandate.

The truckers main concern was the government making decisions about their bodies. They had to cross the border frequently, as was the nature of their job, so they were faced with a choice between their livelihood and taking a recently developed vaccine because of the new mandate. The truckers were one of the only groups who had to keep working hard during the most difficult period of the pandemic, but are now labeled dangerous, and showered with hate from major news sites.

The truck parades have caused blockades all over Canada, including flooding the streets around Parliament and trade posts along the border. This greatly disrupted trade between the United States and Canada.

The Canadian government had a very strong reaction to the freedom convoy, making every effort to shut it down. Prime Minister Justin Trudeau invoked the “Emergencies Act” on February 14. This gives the government enormous power, including the ability to revoke insurance and freeze bank accounts. Mounted police disrupted protests, trampling many people, including an elderly woman.

Not all members of the House of Commons were against the convoy, however. On February 16, Justin Trudeau accused the supportive members saying, “Conservative Party members can stand with people who wave swastikas. They can stand with people who wave the Confederate flag.” Parliament member Melissa Lantsmen responded to this accusation with, “I am a strong Jewish woman. I have never been made to feel less, except for today, when the prime minister accused me of standing with swastikas . . . I would like an apology, and I think he owes an apology to all members of the House.” Trudeau did not respond to this remark. In Canada, the freedom convoy has essentially come to an end due to the government’s intervention. The federal government has since revoked the emergencies act.